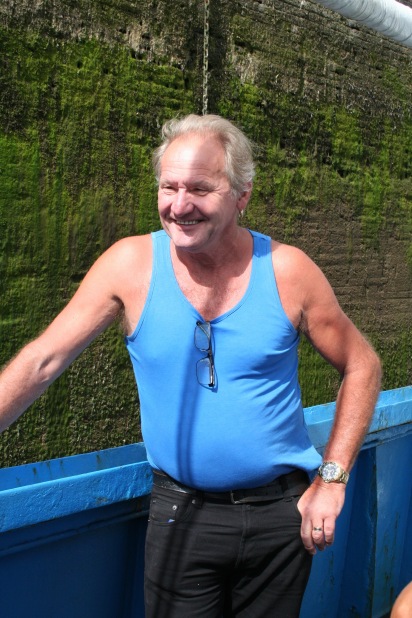 A few swimmers have set out for France from English shores across the Channel without a boat to pilot them. They all drowned.

We didn’t drown thanks to Ray (photo above on the left with a pint) and Reg Brickell and the Viking Princess. The Brickell brothers have piloted “crazy” people across the English Channels’ challenging waters for almost 50 years, following in their dad’s (Reg Senior) wake. All three have been honoured by the International Swimming Hall of Fame and no family is more intertwined in marathon swimming history than the Brickell’s.

Reg started work with his father just before his 16th birthday in 1967 and Ray started when he turned 16 three years later. In 1981, they took over the running of the boat from their father and escort more than 30 swimmers each summer.

With an uncanny knack for picking the right day and time to start a swim based on the individual or team’s strengths and weaknesses, the brothers are highly sought-after pilots  and first choice for anyone trying to break Channel records.

When choosing our boat pilot from among the eight certified by the Channel Swimming Association Limited, the Brickell’s amazing history and track record made it a no-brainer and we reserved our spot with them on the first tide three years before our successful July 26, 2016 swim. Good call…100 per cent. In addition to getting our sorry asses to France relatively in one piece, the brothers now will have a special place in hearts and Christmas cards for years to come. After experiencing such an intense 13 hours and 47 minutes together feelings run strong about the people who help you along the way. For example, I’ll never forget laconic Ray’s little speech to me as I readied for my third swim. “Come on luv. Let’s see a good team captain swim now. Give it your all.” I swam my heart out because of those words. (Some of his other words are memorable too. He used a lot of sailor language to keep us in line, especially if we took too long to get up the ladder.)

With almost 50  years of Channel swimmer piloting there are stories to tell. With a couple of pints in front of the brothers at the Ship’s Inn in Folkestone three days after our swim the tales begin. (There is a picture of Reg senior on the wall near the pub commemorating his remarkable Channel swim piloting).

“There was this one lady we have piloted a few times, can’t remember her name…well she was in there swimming away and would complain from time to time of pain around her mid-section when she would stop on her feed breaks,” says Reg. “This went on pretty much her whole swim. When she got out and stripped off her suit a fish and a jellyfish plopped out. You see she was pretty big in the chest area and they had slipped into her suit and the jelly was stinging her.”

Reg says his biggest peeve is swimmers over-inflating their projected speed. “They tell me they can swim four kilometres an hour but can only swim two. That changes a lot of our planning. Swimmers need to tell us the truth.”

Next to the human aquarium lady story, Reg’s favourite is one about a  guy who takes the cake where the estimation of his ability is concerned. “This fellow had a helicopter and a second boat just to film him as he was a star and they were making a documentary about his swim. He got in with huge cheers, swam about 300 metres and called it quits because it was too hard. They still made the documentary.”

Crazy Canuck John Ostrom says he is very happy with our pilot choice. “He has huge experience, a capable boat and a diligent crew.” John, who grew up on his father’s fishing boat in Prince Rupert, British Columbia has the skinny on what is involved in piloting us.

“Reg’s job is complicated,” John says. “He has to constantly monitor weather conditions and forecasts, other ship traffic, the performance of the Viking Princess’s propulsion and electronic systems and keep tabs on the swimmer and the support team. Any one of these things can change on a moments notice. On top of that, there is the risk of floating debris or oil slicks in the water he tries to avoid. However, Reg will not dodge jellyfish.

“You can see how if the swim team is not doing their job (either by being unprepared or because of seasickness) in monitoring the swimmer in the water, keeping their gear organized or behaving in unsafe ways such as falling or slipping, that as captain, he could easily call off the swim just for that factor.”

Reg has a full suite of electronic navigational equipment including radar, two GPS-based systems with vessel identification capability and numerous radios of different types. The map of our actual swim shows the typical swim path channel swimmers have to take adding many more kilometres onto what could otherwise be a 30 kilometre swim (we swam almost 50 k). The major swings are the result of starting the swim in an incoming tide and then experiencing the outgoing tide six hours later.

Crossing a shipping lane (there are two in the Channel, one north, one south) is tricky at the best of times. What you want to do is cross it quickly to stay out of the way of commercial traffic which is not possible with swimmers. The commercial traffic know we are out there. “What Reg has to do is be predictable and the commercial traffic will slightly alter their course to avoid the Viking Princess,” John says. In fact, the Baltic cruise me and The Handyman went on in 2015 was held up two hours by a Channel swimmer.

The Viking Princess, built as a fishing trawler needs modification to slow it down to swimmer speed. While I was in the water on the first shift Reg and Ray set up a parachute drag system behind the boat. Throughout our swim we heard the boat engine pushing us forward and then stopping to let the swimmer catch up. There is no such thing as auto pilot on a Channel swim.

“We saw that the winds were increasing during our swim,” John says. “We wouldn’t have been able to swim the day after we did as the winds really kicked up.” At one point Reg told us that a few more miles per hour of wind and he would have hauled in the swimmer in the water and pointed us back to England. “It was medium bad out there toward the end of your swim,” he says in his understated way. None of us (save John) had experienced Force 4 in a small fishing trawler in the ocean before and the rocking of the boat caused some bumps and bruises. At one point Ray came out and told us to sit the f*** down, hold onto to something and forget about going in the hold for anything anymore. He said if anyone gets hurt, the swim is finished.

When the waves got crazy from a condition called wind against the tide, the water began to  look frightening but was in fact easier and more fun to navigate while swimming than it was moving around on the boat deck.

Reg’s biggest responsibility is keeping us all safe. He has the ultimate call of when to abort a swim and this power was granted to the Channel Swimming Association boat pilots after a swimmer (not piloted by Reg) pushed herself passed her limit and insisted on keeping going with France so near. She died in the attempt from a heart attack or hypothermia.

“I don’t like to see people fail in their attempt,” says Reg. “It’s no fun at all but for the sake of the swimmer we often have to end it. Our  years of experience help us to know when to make this call. We try to stop a swim before it gets too bad. The decision is made when a swimmer is no longer making good forward progress. They get cold and too tired.” Reg says they also had to pull a swimmer out who had been stung on the tongue by a jellyfish.

“You guys did really well. With the seasickness of a few of your swimmers and in particular Janet, you could have easily packed it in before your sixth swimmer even got in the water. A Channel swim is really hard. It’s hard for solos and for relay swimmers. Don’t sell yourself short as a relay. You have other issues keeping the whole team healthy and ready to get in. You was all a bit touched in the head you know but I think you did a great job looking after each other and muscling through when things got tough.”

Reg’s chat at the bar brought up a fear we had dismissed. “Oh yes, there are sharks in there. I caught a 25-foot basking shark not long ago. It wouldn’t eat you, only come up and give you a kiss.”

I asked Reg if the piloting gets routine and was happy to hear his answer. “We get such a charge out of seeing our swimmers touch the shore in France. We get a lot of pleasure seeing swimmers succeed. Sounding the horn when they make it is amazing. I’m going to do this till I die and I’m not looking around the corner for that.”