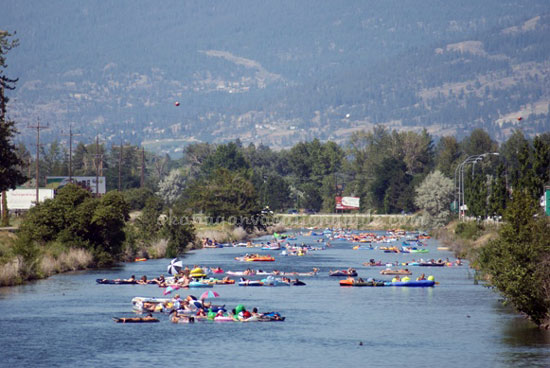 Locals think we are talking about swimming in the Okanagan River Channel, a seven-kilometre-long man-made channel connecting Okanagan and Skaha Lakes. It is filled with people on floaties, often with beers in tow, every hot summer day and is only five-feet deep in many places. “No, we are swimming the English Channel, also called simply the Channel, hence the confusion. It’s the body of water that separates southern England from northern France, and joins the southern part of the North Sea to the Atlantic Ocean. We will swim at its narrowest point of 32.3 km in the Strait of Dover.”

2. You wear a wetsuit right?

No, just like the first woman to swim the Channel, Gertrude Ederle, we will wear bathing suits, caps and goggles. Gertrude was slathered in blubber from baby dolphins, mainly because she was allergic to the salt in the water. Today’s solo swimmers can buy Channel Grease from Boots Pharmacy in Dover. It’s made from the sap of an Amazon rainforest tree. Us relay guys won’t need it with our one-hour stints in the sea.

3. So, you find the biggest bathing suit you can to keep warm? One with legs?

Nope. And they are called swim costumes. “A standard swim costume shall be of a material not offering thermal protection or buoyancy and shall be sleeveless and legless. Sleeveless shall mean the costume must not extend beyond the end of the shoulder onto the upper arm and legless shall mean the costume must not extend onto the upper leg below the level of the crotch.” So basically we are talking speedos for the guys.

It’s not a race as in a mass start all on one day, although times are meticulously recorded by an independent observer of the Channel Swimming Association. Swimmers head out throughout the swimmable period, which is pretty much July to September, according to weather and tides.

5. How do you know where you are going?

Swimmers don’t have to worry about that. You are escorted by one of eight Channel Swimming Association pilot boats. We will be in the capable hands of Reg Brickell, whose father also piloted Channel swimmers. We will swim alongside, (without touching) the trawler, Viking Princess and when at sea Reg has the last say on our safety.

6. Lots of people have done this right? It’s not that big a deal?

If we make it, we will be among a pretty elite club, even as a mere 6-person relay team. My admittedly dated 2011 record book shows only four Canadian relay teams have made this swim. I know of one other that swam it two years ago as they live at the other end of our big lake and I’m sure there have been a few others since. Half our team will be 60 in the year of our swim so that will be cool too. Touching wood, fingers crossed, rabbits foot…

7. What will you do when you get to France? Holiday?

After the lucky last swimmer on the relay team walks or crawls on the French shore above the waterline somewhere near Cap Gris Nez, we hop in the dingy until we hit deep enough water to board the Viking Princess and motor for Dover. Although we all have to have our passports onboard, we aren’t allowed to stay in France. It’s tradition to take a pebble from the French beach with you as a souvenir.

8. It’s only about 32 kilometres right? You can see France on a clear day right?

Strong currents and tides mean you swim a lot further and a typical swim looks like an “S”. In fact, the slowest ever successful swimmer took more than 28 hours to complete the swim. She ended up swimming 70 kilometres as she pushed well off course by strong tides. We don’t want to beat that record.

9. Aren’t you afraid of the deep water?

No. We are all used to swimming “in the deep end” and have lots of deep lake swimming away from shore experience. But, we are afraid of the cold water, jellyfish, swimming in the dark at night, being in the busiest shipping lane in the world, not the cleanest water to swim in, getting seasick either on the rocky fishing trawler or in the sea while swimming, letting our team down by not swimming hard enough to get through the currents and the biggest one of all… Getting to England and not being able to even attempt the swim if the weather is too bad during our swim window (July 26-August 1). Rabbit foot, touch wood, salt over shoulder…

Because it’s there? Speaking of Everest… About 3,000 people have climbed it and less than 1,000 have swum the English Channel solo. We all have our reasons. Here’s the story of Crazy Canuck team member Charlie:

“I’m swimming the Channel because of a combination of things. You twisted my arm and I was dropped on my head.” More seriously she talks of the amazing English Channel history and that swimming on a relay team seems a “doable” way to be a part of that amazing story.

Charlie is an athletic goddess in my eyes. She holds the Woman over 50 records for both Ultraman Canada (2011) and Ultraman Australia (2015) among other achievements. Enough said.

“My biggest challenge is with the cold water. I’m sure I had some mild hypothermia after our test swim. My brain was pretty fuzzy and it took forever to get into warm clothes. It should be OK though as it’s only an hour at a go and the Channel will likely be warmer than our test swim was.”

She says she also looking forward to adding our names to the walls of the White Horse in Dover and celebrating with a pint.