why open water swimming is making a come-back 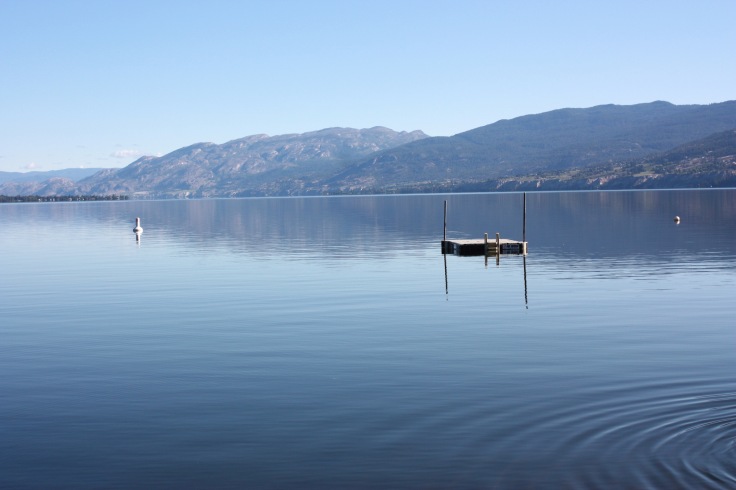 When we were kids, open water swimming meant freedom – no lifeguards, no chlorine, no drudgery of laps following the black line on the bottom of the pool. Recapturing some of that freedom is part of why open water swimming events are the fastest growing watersport of the decade. 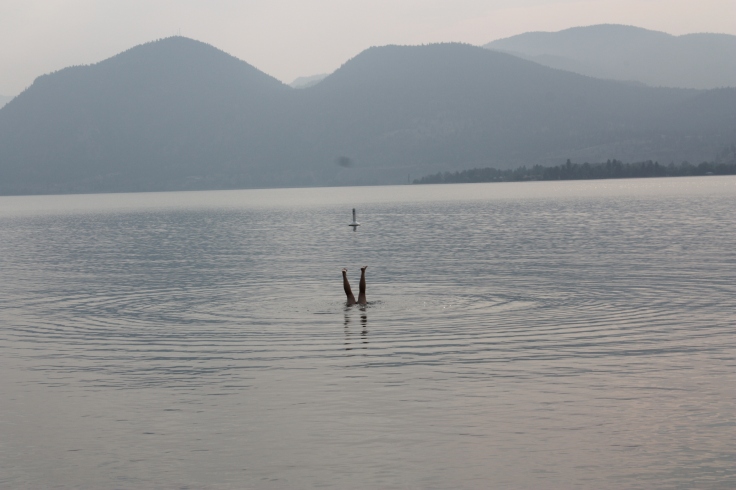 A lot of Okanagan open water afficiandos came to the sport from triathlon and yet more became interested after marathon swimming was introduced into the Olympics at Beijing. Lake Okanagan has a long history of open water events. The Across The Lake Swim began in 1949 and is the longest running and largest (1,200 swimmers) annual open water event in Canada. This swim was recently recognized as one of the top swims in the world by openwaterpedia.com. The 3.1 and 7 k Rattelsnake Island Swim is a destination swim attracting a loyal following and new swimmers every year. The Skaha Lake Swim started life in 1985 and despite a small hiatus, is back to celebrate it’s 20th anniversary this year.

International attention was brought to the lake last summer when Adam Ellenstein entered the Guinness World Record with the fastest, continuous lengthwise swim of British Columbia’s Okanagan Lake.  The 39-year-old U.S. resident completed his 106.6 kilometre swim from Vernon to Penticton in 40 hours, 57 minutes and 11 seconds.
Ellenstein’s swim began in the early hours of July 25 and wrapped up late the next night (just about the time my Crazy Canucks English Channel Relay team completed our swim from England to France).

Okanagan Lake’s clean and relatively warm waters are shark and jelly fish free making open water swimming here all the more enjoyable. Winds can whip the lake into some challenging waves but events are held in the relatively calm waters first thing in the morning.

It’s back and I was the first swimmer to register

The newly resuscitated Skaha Lake swim started life in 1985 organized by local sport’s legend Steve King as a complement to the Ultra International Triathlon which the next year became an official Ironman. 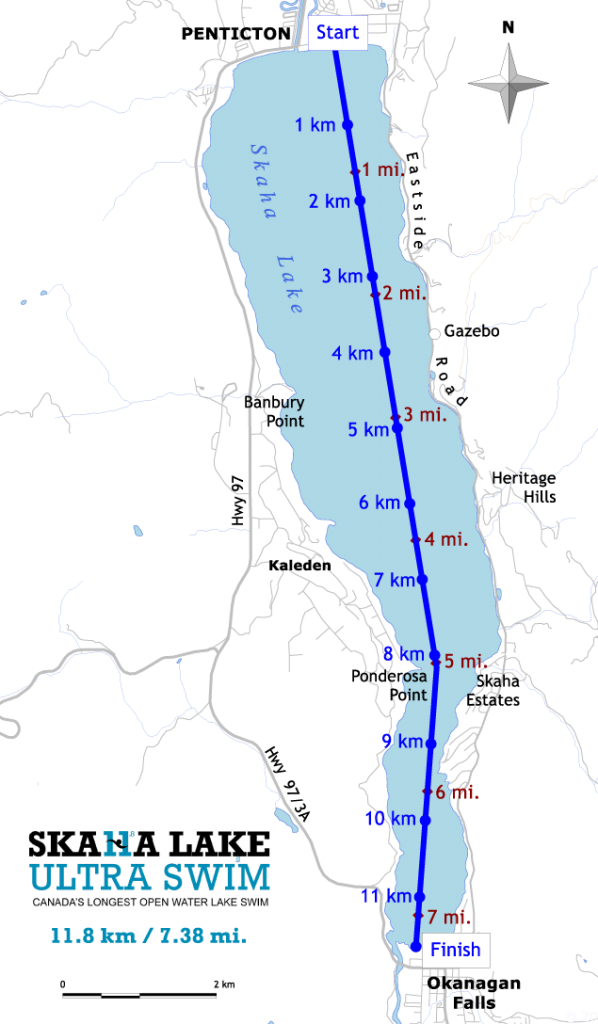 “The Race took a hiatus because we hadn’t been able to find the right race director,” says King. “Now we have a solid team in place. There is definitely a rise in participation and interest in open water swimming,” says King. “You can look at the increase in numbers in Master’s programs, events like the Across the Lake swim and the new Canaqua Open Water Swim Series (this event will be part of that). We always had swimmers from the U.S. and a few other internationals and the South Okanagan is now world-renowned as a sports mecca.”

“Reviving the race has been on everyone’s mind for a number of years,” says one of the Skaha Ultra Swim organizers Steve Brown.

The event returns Aug. 13 for the 20th running of the race that was held from 1985 to 2004 with the exception of 1999. Brown is joined by Steve King, Shelie Best, as well as ultra distance athletes Chad Bentley, Matt Hill and Lucy Ryan of Vancouver. The group came together last September and talked about resurrecting the Ultra Swim.

The Skaha Lake Ultra Swim is being reinstated as an official event of Peach Festival. The swim is 11.8 kilometres starting from Skaha Beach to Kenyon Park in Okanagan Falls. The swim begins at 7 a.m. and ends at 1:30 p.m. or six hours, 30 minutes later. Entry is limited to 100 athletes and their support paddlers. The race is affiliated with Canaqua Sports Open Water Series. Now in its third season, the Canaqua Sports Open Water Series has grown to nine open water races for 2017. The goal of the series is to promote open water swimming across Canada, creating a Canadian brand to the sport. Currently there are two in B.C. (Invermere and Penticton), one each in Saskatchewan and Manitoba and five in Ontario.

“No question that there has been an upsurge in open water swimming interest,” says Brown. “Skaha is unique in that swimmers will swim the entire length of the lake. There are a lot of swims that go across lakes but we are the longest lake swim in Canada and that’s why there is huge interest in this one.”

Swimmers this year will be gunning for some records including the one set by
Luke Stockdale of Port Coquitlam who swam 5:50:42 in 1992 and did it all with the butterfly stroke. The most senior finisher ever was 70-year-old Lorne Smith of Okanagan Falls 5:10:38 in 2004. The most wins for men has been four  by record holder Serge Score and five for women by record holder K.C.Emerson. Swim times have varied from the record 2:21:44 to 6:35:13.Participants must be at least 16 years of age and swim the distance. There is also a cut off at eight kilometres at Ponderosa Point which swimmers must reach in four hours, 25 minutes.

For safety reasons each athlete has a specific support watercraft with them throughout the swim. Organizers also provide high-speed rescue watercraft with medical and lifeguards in case of emergency.

“There is also a huge interest in open water swimming from older age groups as well,” says Brown. “For those athletes that have been beating themselves up on the roads for years swimming, even long distances, is a kinder, gentler from of exercise.”

The earliest known open water swim races were held in Japan and then Europe during Roman Times. The sport reached a heady popularity in the early 20th Century in North America where its heroes were front page news.

In Canada, crowds in the tens of thousands flocked to Toronto in the 1930s. They came to cheer on local favourites for purses that would equal hundreds of thousands of dollars today. Huge crowds, big paycheques and ticker tape parades awaited winners like Marilyn Bell and Winnie Roach Leuszler.