We chat quietly with whomever is closest to us in the row as we bend and search for the attachment points (there is actually a word for these…peduncles) for the gorgeous clusters of Malbec and snip and toss them into the lugs. It’s a glorious 14 degrees with not a cloud in the sky in a beautiful piece of the Naramata Bench called Rock Oven Vineyards perched just above Lake Breeze Winery. If I’m working next to Barry (Irvine), who along with his wife Sue, own the vineyard, I ask him about the grapes we are harvesting, what they will be made into and the Naramata wine industry. 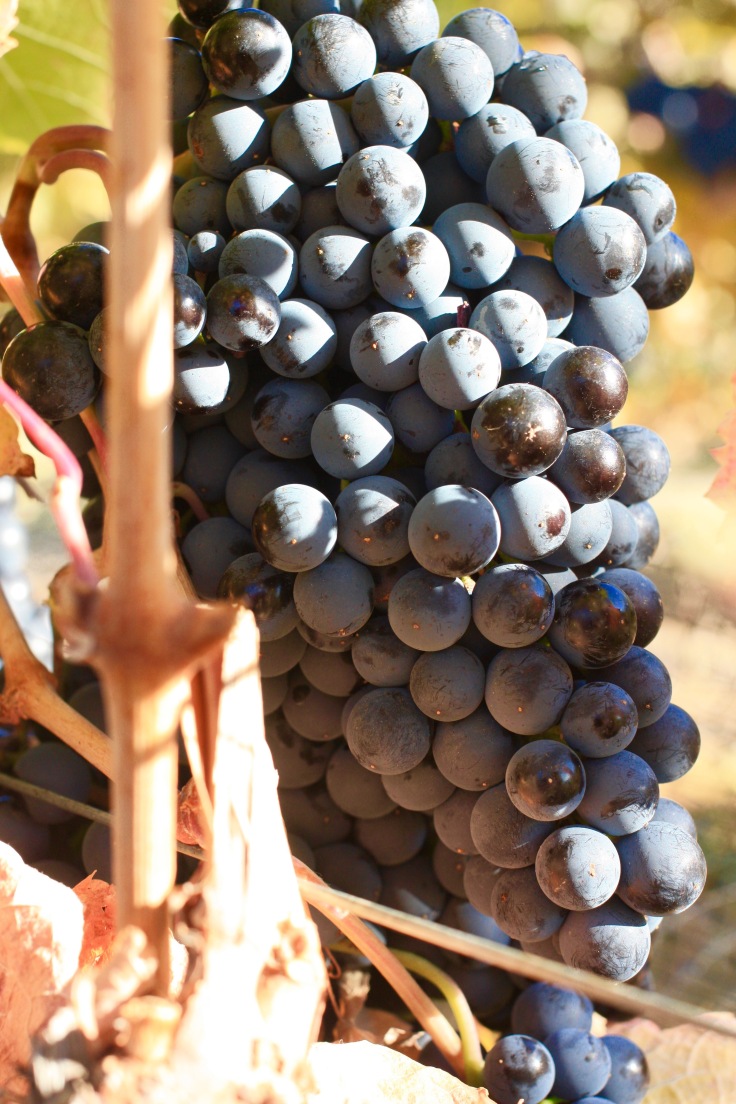 Malbec (sometimes called Côt and Auxxerois) is from France, where it grows in the Sud-Ouest. The thin-skinned grape is a natural cross of two esoteric varieties that are from Montpellier and Gaillac in the Sud-Ouest. Today the majority of France’s Malbec is found in Cahors, a small town on a switchback river that gently flows towards Bordeaux.

Malbec quickly became common as a blending grape in Bordeaux’s top five wine grapes. However, because of the grapes’ poor resistance to weather and pests, it never surfaced as a top French variety. Instead, it found a new home in Mendoza, Argentina where a nostalgic French botanist planted it by order of the mayor in 1868. It also grows well in our increasingly hot and dry Okanagan climate.

Malbec produces an inky, dark, full-bodied red wine. Expect rich flavours of black cherry, raspberry, blackberry and blueberry. Malbec wines typically have an aroma of leather, spice and herbs. As with all wines, the characteristics of Malbec can be unique to the area in which it’s grown, but it typically has medium ripe tannins with rich acidity and a smoky finish.

The lovely tasting Malbec we are picking will go right to Lake Breeze and will become a Rosé. The 2016 varietal was award-winning and has sold out.

Barry and Sue Irvine sat on their deck overlooking Okanagan Lake sipping wine almost three decades ago with the founders of Hillside Cellars, Lang Vineyards and Wildgoose discussing the farmgate proposal they spearheaded together that eventually lead to these small producers being allowed to sell their own wine.

“I remember talking to Premier Bill Vander Zalm who said that all the orchards on the Bench would eventually be replaced by vineyards,” says Barry. “I didn’t believe him at the time.”

The Irvines converted their cherry orchards to vines beginning in 1981.

In more recent years, they have sold off much of their vineyards but are still keeping their hand in with the Malbec we are harvesting and with some unusual Schonberger grapes.

Barry says that the vines from the grapes we are carefully hand-picking today are the result of at least 10 passes through the vineyards.  The careful tending includes hours and hours spent pruning, tucking, thinning and spraying for mildew throughout the growing season. Vineyard management is not for the faint of heart.

Covered in dirt from sitting on the ground to reach the low-hanging bunches, sticky from the grape juice, tired and sore we all converge on the last row working side-by-side until the vines are bare of fruit and the bins are heaped.

It’s hard to romanticize harvesting grapes on the Naramata Bench with all the bending and lifting and all the hard work leading up to it but on a day like this with great company, interesting conversation and views so spectacular they don’t look real, it’s impossible not to.